This page is dedicated to the latest happenings in Pennsylvania.  Whether it be new Cryptid sighting, Paranormal reports, cases, investigations or anything strange and unusual, you'll find it Here.  I invite you to continually check back for the latest goings on in my research.   I will be updating this page very soon with some of my recent investigations during the past few years.

You can check the Pennsylvania Cryptozoology Society webpage at
www.pacryptosociety.com.   There you will find a listing of cases my group has investigated.

You may also follow up some of my previous investigations I was part of or conducted by visiting www.pabigfootsociety.com and clicking on the sightings page for recent and archived cases.

***please note, the eyewitness report, my follow up summary, photos and videos are re-posted with the written permission of both witnesses and Cliff Barackman.***

On March 31, 2015 Two witnesses submitted an encounter and track discovery to Cliff Barackman at www.cliffbarackman.com.  Cliff and I corresponded by email and he asked me to look into the report and talk to the witness.  I emailed the witness on April 3rd and spoke with the witnesses by phone on April 4th.  At the request of both the witnesses and Cliff, I have omitted the exact location and witness identities from the report. This is what the witness submitted to the forum and my follow up Summary -

It took place on a trail in a public forested area.  The encounters occurred on a secondary hiking trail off the main trail from the parking lot. From the parking area, the witnesses walked 100 yards before following a game trail up a heavily wooded hill. They followed the game trail for probably another 100-150 yards before we started to encounter wood knocks.  The two eyewitnesses also discovered large human shaped tracks in the snow.

Here is their encounter in their own words as posted to Cliff's forum.

"We made our way to the back of the trail. In the far corner there is a hiking trail leading up into the woods. We began to follow the hiking trail for approximately 100 yards before spotting a game trail. We decided to walk up the game trail, we followed the trail for another 100-150 yards before we were stopped in our tracks by wood knocks. We stood still for around 20 minutes while we gave off wood knocks of our own. Our wood knocks were responded to for roughly 15-20 minutes on and off. The knocks came one at a time and from three separate locations we believe. After the 20 minutes we decided to turn back because we were running out of day light. As we made our way back towards the main trail we continued to hear knocks from behind as if the Sasquatch/Sasquatches were following us. Once we made it back to the original trail we sat at a pavilion to talk about what happened. We then investigated an area around the pavilion we sat at the previous week where we believe we had seen a dark figure 20-25 yards from us. We found several footprints that we believe are Sasquatch related in the area of the dark figure. As we investigated the tracks we continued to hear knocks along with a grunt of some sort. The tracks were deeply imprinted into frozen snow about a foot deep. We weren’t able to break through the snow ourselves to equal the depth of the Squatch tracks, each of us weigh 200lbs. At approximately 7:30pm we made our way back to our vehicle, we stopped half way back on the trail behind cover of trees to give one last howl, our only howl we gave off all night. Within 10 seconds of our howl we received a howl in return, similar to ours. We have multiple photographs of the tracks and videos of the wood knocks as well as movements we believe we detected. Upon request I would be able to send you all of our evidence. In this area of PA the temperature is still below freezing and there is still about a foot of snow, and we believe any black bear in the area would still be hibernating. We would very much appreciate your input on the tracks. We will be heading back out tomorrow morning to see what else we can find and take pictures with a better camera. All of our images and recordings came from my I Phone 6."

Upon speaking with the witnesses by phone, this is the summary report for March 22 and 29, 2015 near Bradford, PA McKeen County.

After speaking with the witnesses, I learned they had two encounters in this area and do not believe that what they experienced was human related as they saw no one, no signs of anyone being in the area and no one parked at the parking lot where they parked their car.

The two men traveled to outside Bradford, PA in McKean County to a forested area.  The trail is located not far from the Kinzua Dam Reservoir.

Their first trip to the area was on March 22, 2015.  The weather on March 22, was 27 degrees with several inches of snow on the ground.    Upon hiking in the area on their first trip, the two men told me about finding several large human shaped prints in the snow.  They did not site measurements or size of the prints, but noted the tracks were very deep in the snow and did not appear to be boot prints or human prints.  They also discovered what they felt were butt prints where something sat near or against a tree.   They had a feeling they were not alone in the area.

The weather condition on March 29 was 38 degrees with snow remaining on the ground.  On the second trip to the area on March 29, the two witnesses were hiking and were greeted by multiple wood knocks coming from different directions.  They did reply with several wood knocks and were answered by additional wood knocks coming from different directions.  The men were able to capture the wood knocks on video.  They also had a feeling of being watched and at one point were pretty certain they saw movement in the trees which appeared to be a large figure poking it’s head out from behind a tree.

The two men are planning to return to the area to continue to follow up and collect any additional evidence if possible.

It is my opinion after talking to the witnesses and seeing the photos and video provided the eyewitnesses did in fact encounter something on their two trips to the area.  The photos, although inconclusive without measurement do appear to be much larger than a human foot and may show toes in the front of several photos of the tracks discovered.   In the video, you are able to hear what appears to be wood knocks.  Unfortunately, the source of the wood knocking is never shown, so again leaving the evidence inconclusive.   I do feel the men were sincere in relaying what they experienced and did experience something in this location.

No creature sighting was confirmed and no other experiences were related.

The eyewitnesses did share their videos and photos of the tracks with me which were forwarded off to Cliff and will be uploaded to the sight in the near future.

The photos below were discovered by the two men, however not measured for length or width.  They have forwarded video broken into several parts taken with the Iphone 6 which will need to be edited to make one continual video and posted to the page once completed. 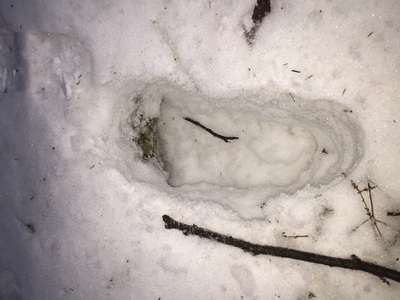 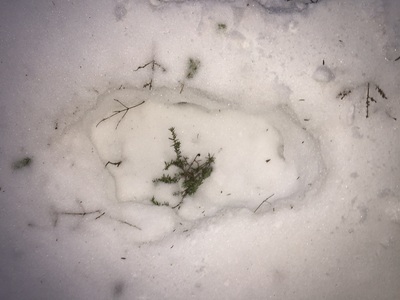 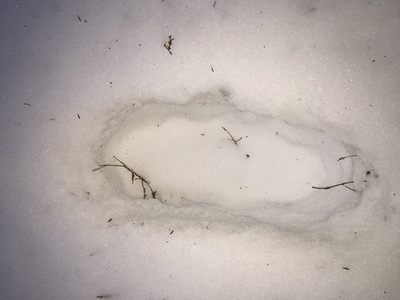 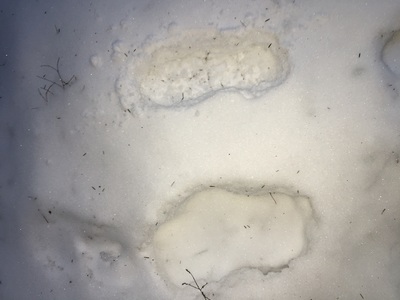 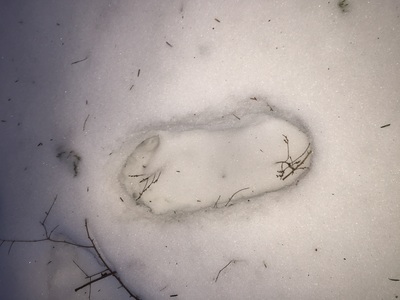 I was able to interview witness B by telephone on December 19, 2014 and again on December 20, 2014 in person at the location of the sighting.  The other witness who saw the figure first, has not come forward to talk with me about what he saw.

Witness B describes his sighting as such.    While driving home from work at approximately 3:15 am he was headed east on Route 62 between 50 and 55 mph.   The witness saw a very large figure walking with the flow of traffic on the opposite side of the road way.  He did not see arms swinging, he did not see specific features or any type of hair.  The witness described the figure as being an all uniformed color.  The color was that of a light brown, as he stated similar to the color of a deer.  The figure seemed to be moving very gracefully, as if it were gliding along.  The witness saw the figure for several seconds before passing by.   The witness ruled out the possibility of this being a person due to several factors.    He estimated the height of the creature to be between 6 1/2 to 7 feet tall.  The shoulders and upper body was massive in size coming down to a tapered and thin waist.  The witness stated that the legs were two to three times the size of his.   The witness emphasized that the figure was much larger than a NBA pro player or an NFL Football player.  He stated the figure was much larger than former Pittsburgh Steelers Tackle Max Starks who is 6'8" and weighs 370 lbs.  The witness stated the figure made Max look like a child.  The witness did also state that two other colleagues were driving behind him approximately 150 to 200 yards.  When he questioned them later if they too had seen the figure, they both stated they did not.

After passing the figure along side the roadway, he stopped at a convenience store where he spoke to his colleague who saw the figure just a few moments before.  When he asked him if he saw the figure, the other witness replied,  "You mean that giant F****** walking on the side of the road."  Which confirmed he too saw the figure.

The Investigation:   Upon arriving at an agreed upon location in Mercer, PA  at Noon on December 20, 2014,  the witness and I traveled to the location where he had his sighting.   I took several photos of the area and it was difficult to do any measurements or conduct a thorough investigation due to the high volume of traffic.  However, I did document the witnesses statements, and took photos of the area.   A look over the area revealed there is snow cover on the ground, however no prints or any physical evidence was located.  My personal opinion is that the figure turned and either stepped over the guardrail or walked into the clearing on the left at the end of the guardrail and into the wooded area out of sight.

Conclusion:  I feel that the eyewitness definitely saw something.  What it was can not be determined as his encounter was very brief and he did not see any arms, or distinctive features.  It is uncertain what the witness saw, how ever he is emphatic that it was not a person.  The witness testimony was very intriguing and believable.  However unless we are contacted by any other witnesses with further information or evidence to present, the case will remain unresolved as to what the witness saw on December 17, 2014. 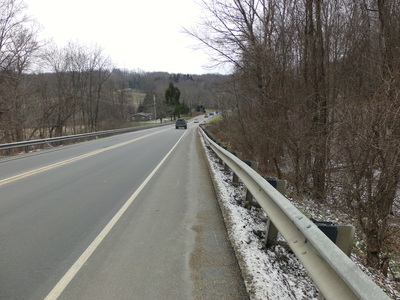 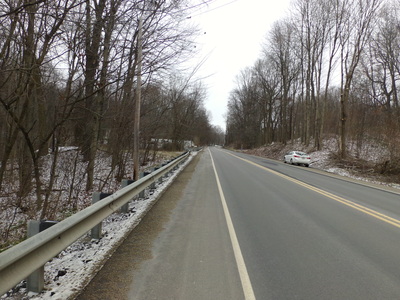 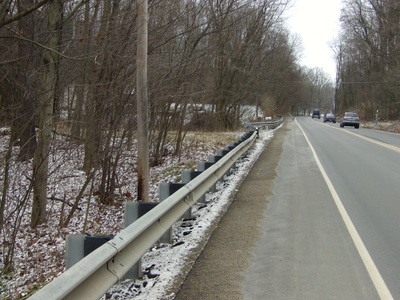 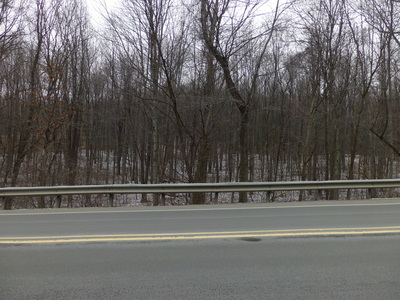 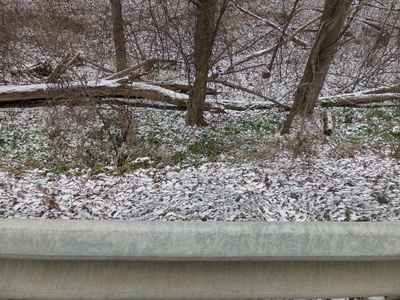 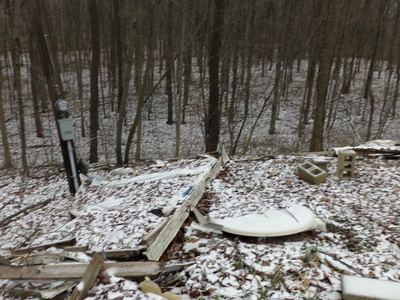 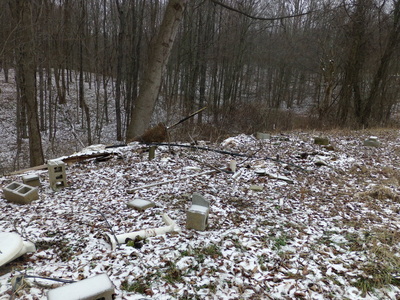